Coronavirus: the importance of ventilation 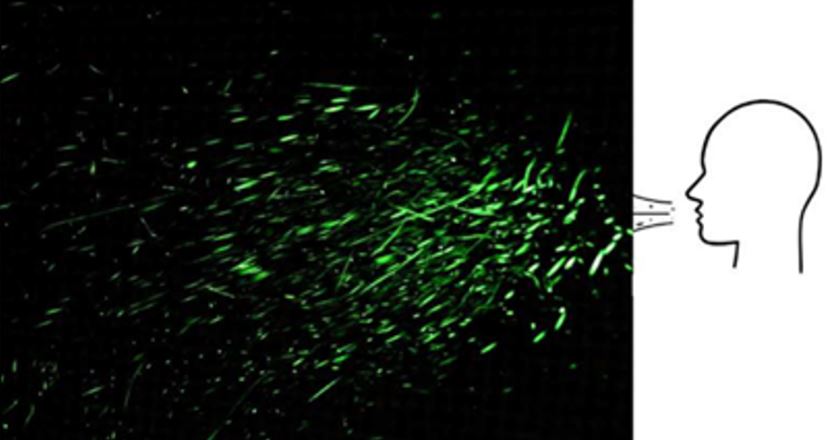 Droplets produced by coughing, photographed using laser techniques. The large droplets will fall to the ground within one second, whereas the tiny droplets can remain in the air for several minutes. Image: The Lancet / G. A. Somsen et al.

Using laser light techniques, University of Amsterdam physicists and medical researchers have found that small cough droplets, potentially containing virus particles, can float in the air in a room for many minutes, especially when the room is poorly ventilated. Good ventilation in public spaces (e.g. public transport, nursing homes) is therefore crucial to slow down the spread of the coronavirus. The results were published in the scientific journal The Lancet Respiratory Medicine on Thursday, 28 May.

The research was carried out by physicists Daniel Bonn, Stefan Kooij and Cees van Rijn from the UvA Institute of Physics, together with medical researchers Aernout Somsen (Cardiology Centers of the Netherlands) and Reinout Bem (Amsterdam University Medical Centers).

The researchers asked healthy test persons to speak and to cough, and used laser light to analyse the droplets that were produced. Both during speech and coughing, large amounts of small droplets (between roughly 1 and 10 micrometres in size) were observed. During coughing, larger droplets (up to 1 millimeter in size) are also produced. Those droplets fall to the ground within one second, however, and therefore have a much smaller probability of transmitting viruses.

The small droplets only move very slowly to the ground due to the large amount of air drag they experience. The researchers found that such droplets can stay in the air for several minutes. After a single cough, it takes about five minutes for the number of small droplets in the air to be halved. These tiny droplets are therefore much more dangerous when it comes to possible transmission of the coronavirus

The importance of ventilation

When the same measurements were repeated in a well-ventilated room, the results improved dramatically. With only mechanical ventilation turned on, half of the droplets disappeared within 2.5 minutes, but in a room that also had a door and window open, the number of droplets was halved after 30 seconds – ten times faster than in the unventilated room.

The result is of importance for making better policies to slow down the spread of the coronavirus. Despite physical distancing, spaces like public transportation and nursing homes can still be centres for spreading the virus if insufficiently ventilated. When droplets remain in the air for a long time, proximity tracing via smartphone apps is also an insufficient precaution. The researchers therefore recommend healthcare authorities consider recommendations to ensure adequate ventilation wherever possible in public spaces.

Twitter
Tweet
Altro in questa categoria: « ‘Near-unlivable’ heat for one-third of humans within 50 years if greenhouse gas emissions are not cut Planting trees on coffee fields and plantations can protect coffee plants from climate change »

Soy and wheat proteins helpful for...

Soy and wheat proteins helpful for...