The DNA of Life at its Limits 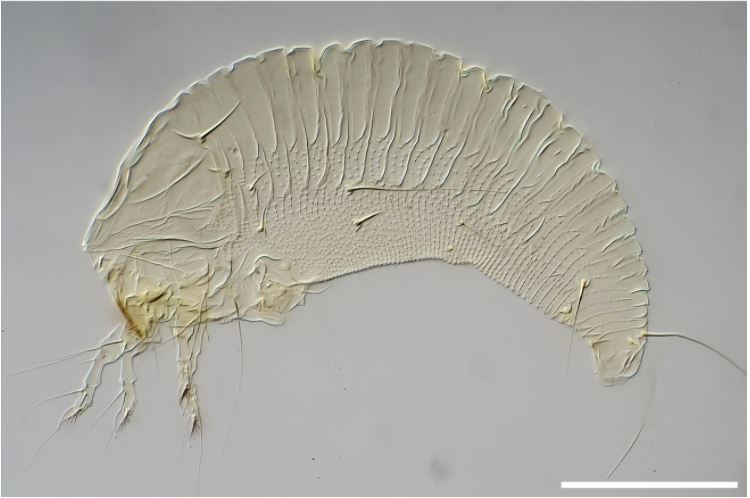 Scientists have unraveled the complete genome of the tomato russet mite, which is considered one of the smallest animals on our planet and known as a destructive agricultural pest. The genome is the smallest reported to date for an arthropod and offers intriguing new insights into the organization of the tiniest lifeforms on Earth. The international consortium of European and American researchers, including UvA biologist Merijn Kant, now published their findings in the scientific journal eLife.

A tiny animal living in a huge world

The tomato russet mite (Aculops lycopersici) is a free-living herbivore that has the size of a human egg cell. In addition to miniscule proportions, this worm-like mite has a highly derived morphology with only two pairs of legs, as opposed to the four pairs of most other adult arachnids. Though the mite’s small size restricts it to feeding on the nutrient-poor upper cell layers of plants, it nevertheless possesses the notable ability to block the natural resistance of its host, on which it can proliferate rapidly and reach enormous population sizes. Due to its minute size, the tomato russet mite is often overlooked by growers and is now a major global pest on tomato. The genomic underpinnings of this mite’s tiny size, derived morphology, and ability to grow on tomato plants that are toxic to many herbivores has until now remained unknown.

The smallest genome
The researchers sequenced the genome ofA. lycopersicibecause it belongs the Eriophyoidea, a group of about 4,000 highly derived miniaturized animal species for which no representative genome was yet available. They were particularly interested in investigating whether its peculiar ecology as well as its derived morphology and small size, could be linked to its genomic makeup. ‘The tomato rust mite genome is much smaller than that of any other arthropod sequenced until today,’ says last author Merijn Kant from the UvA Institute for Biodiversity and Ecosystem Dynamics. ‘Its size is in the same range as that of fungal genomes’. The consortium discovered that the mite’s genome contains most of the gene families one would expect for an animal, although these are extremely reduced and several genes believed to be essential for animals were found to be absent.

Especially noteworthy in the russet mite genome is that 80% of its genes have no ‘introns’. ‘Introns are the dark matter of our genomes’ Kant says, ‘these are chunks of non-coding DNA littered in large quantities across genes. No one knows why they are there or where they came from.’ Introns have often been suggested to represent ‘junk DNA’, that is, parts of a genome that have no biological function, but in more recent years that view has begun to change. ‘Giving up introns may have been the price of specializing to an extremely nutrient-poor diet’ Kant says. Genome streamlining has been predicted for organisms living in extreme environments where there are limited nutrients available for the synthesis of DNA. ‘And the plant epidermis is like cardboard’.

Explanations from the genome for manipulation of host plants
This study also uncovered several other features of extreme animal genome reduction. However, more closely related mite genomes are needed for comparative studies to elucidate the molecular mechanisms of events such as intron loss and its timing. ‘There are several genome initiatives ongoing’ Kant says, ‘that may deliver the data that will make such analyses possible in the near future’. The genome will also facilitate the development of genetic markers to enable early detection of mite infestations in agriculture. ‘But I will use this genome’, Kant says, ‘for investigating why some herbivores can suppress host-plant defences while many others cannot, as it could explain the formation of pests in agriculture’.

Twitter
Tweet
Altro in questa categoria: « The Potential of Antimicrobial Peptides as an Antiviral Therapy against COVID-19 Age and Location in Severity of COVID‐19 Pathology: Do Lactoferrin and Pneumococcal Vaccination Explain Low Infant Mortality and Regional Differences? »

Darwin’s handwritten pages from On...