The Indonesian Lusi eruption – a significant source of greenhouse gases 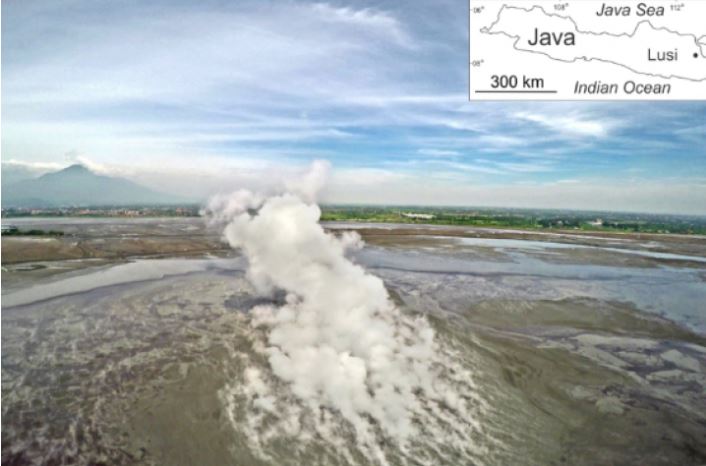 The main Lusi vent and its plume during regular geysering activity. In the background of the image the active Arjuno-Welirang volcanic complex is visible. Video can be viewed on YouTube. Photo: Adriano Mazzini/CEED/UiO


A new study in Scientific Reports quantifies the amount ofmethane emissions from the Lusi eruption. The emissions of 100,000 tonnes methane per year are the highest measured from a single terrestrial natural gas manifestation.

Lusi is the nickname of a gas manifestation that developed in 2006 on the Java Island, Indonesia. Today, Lusi is the world's largest active clastic eruption.

Since its inception, Lusi has been relentlessly bursting water, oil, gas and mud, with flow rate peaks of up to 180,000 m3(cubic meters) per day. Its vapour plumes rise several tens of meters in height. During these years the mud has engulfed several villages expanding over a surface of several square kilometres.

The mechanisms fuelling Lusi
An international collaborative study led by CEED researcher Adriano Mazzini at the University of Oslo, Norway - in the framework of the ERC grantLUSI LAB- has monitored and analysed the Lusi vent over several years. Results have shown that this geological phenomenon is fuelled by high fluid pressures in sedimentary rocks and high temperatures resulting from the interaction with the neighbouring magmatic volcano. Lusi is therefore considered the surface manifestation of a hybrid sedimentary/hydrothermal system.

The erupted gas is rich in carbon dioxide (CO2) and methane (CH4), which are expelled at a central crater and across thousands of vents covering an area of 7.5 km2(square kilometers).

The amount of gas has remained unknown
The research team combined ground-based and satellite (TROPOMI) measurement techniques to quantify the amount of gas released to the atmosphere by Lusi. Both techniques indicated a total methane output of about 100,000 tonnes per year. This is the highest methane emission ever recorded experimentally for a single natural gas manifestation.

The results, published recently in Scientific Reports, suggest that recent estimates of global geological methane emissions, based on radiocarbon in pre-industrial era ice cores (ranging from 100,000 to 5,400,000 tonnes of CH4per year), may be underestimated.

In other words, the amount of methane released by Lusi alone, already matches the minimum assessment of the ice-core based studies for the entire planet.

The emissions from Lusi are thought to be proportionally consistent with the level of methane flux (the so-called “emission factor”) typically released by other, similar terrestrial natural gas manifestations (e.g. mud volcanoes, large methane seep systems).

If all these degassing sites are combined globally, the bottom-up global estimates lead to a total output in the order of 40-50 million tonnes per year.

Knowing the true amounts and fluxes of methane release from natural geological sources is important to better assess the anthropogenic gas emissions, such as from the oil industry, and the atmospheric methane budget in general.