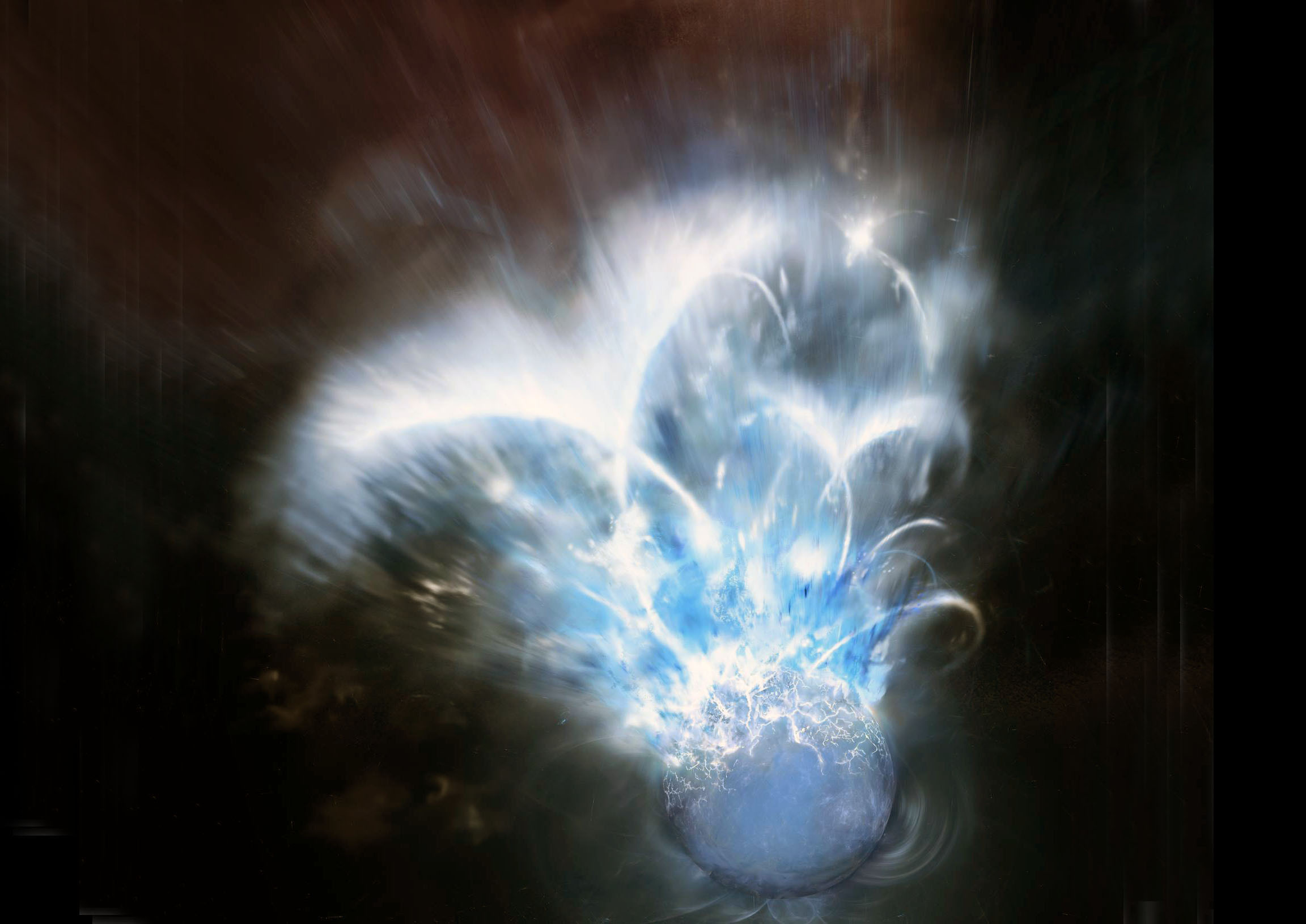 An international scientific group with outstanding Valencian participation has managed to measure for the first time oscillations in the brightness of a neutron star –magnetar– during its most violent moments. In just a tenth of a second, the magnetar released energy equivalent to that produced by the Sun in 100,000 years. The observation has been carried out automatically, without human intervention, thanks to the Artificial Intelligence of a system developed at the Image Processing Laboratory (IPL) of the University of Valencia.

Among the neutron stars, objects that can contain half a million times the mass of the Earth in a diameter of about twenty kilometres, stands out a small group with the most intense magnetic field known: magnetars. These objects, of which only thirty are known, suffer violent eruptions that are still little known due to their unexpected nature and their duration of barely tenths of a second. Detecting them is a challenge for science and technology.

An international scientific team with outstanding participation from the University of Valencia has published recently in the journal Nature the study of the eruption of a magnetar in detail: they have managed to measure oscillations – pulses – in the brightness of the magnetar during its most violent moments. These episodes are a crucial component in understanding giant magnetar eruptions. It is a question long debated during the past 20 years that today has an answer, if there are high frequency oscillations in the magnetars.

The work has the contribution of six researchers from the University of Valencia and a high Spanish participation – 15 scientists out of a total of 41. “Even in an inactive state, magnetars can be one hundred thousand times more luminous than our Sun, but in the case of the flash that we have studied – the GRB2001415 – the energy that was released is equivalent to that which our Sun radiates in one hundred thousand years”, points out lead researcher Alberto J. Castro-Tirado, from the IAA-CSIC.

“The explosion of the magnetar, which lasted approximately a tenth of a second, was discovered on April 15, 2020 in the midst of the pandemic”, says Víctor Reglero, professor of Astronomy and Astrophysics at the UV, researcher at the Image Processing Laboratory (IPL), co-author of the article and one of the architects of ASIM, the instrument aboard the International Space Station that detected the eruption. “Since then we have developed very intense data analysis work, since it was a 10 ** 16 Gauss neutron star and located in another galaxy. A true cosmic monster!”, Remarks Reglero.

The scientific community thinks that eruptions in magnetars may be due to instabilities in their magnetosphere or to a kind of “earthquakes” produced in their crust, a rigid and elastic layer about a kilometre thick. “Regardless of the trigger, a type of waves is created in the star’s magnetosphere –the Alfvén– which are well known in the Sun and which interact with each other, dissipating energy”, explains Alberto J. Castro-Tirado.

According to the study published now in Nature, the oscillations detected in the eruption are consistent with the emission produced by the interaction between Alfvén waves, whose energy is rapidly absorbed by the crust. Thus, in a few milliseconds the magnetic reconnection process ends and therefore also the pulses detected in GRB2001415, which disappeared 3.5 milliseconds after the main burst. The analysis of the phenomenon has made it possible to estimate that the volume of the eruption was similar or even greater than that of the neutron star itself.

Algorithms of the University of Valencia capture it without human intervention

The eruption was detected by the ASIM instrument, which is on board the International Space Station (ISS). ASIM, where the University of Valencia participates, was the only one of the seven telescopes capable of registering the main phase of the eruption in its full energy range without suffering saturations. The scientific team was able to solve the temporal structure of the event, a truly complex task that involved more than a year of analysis for just two seconds during which the data was collected.

The Atmosphere Space Interactions Monitor (ASIM) is an ESA mission developed by Denmark, Norway and Spain, which has been operational in the ISS since 2018 under the supervision of researchers Torsten Neubert (Technical University of Denmark), Nikolai Ostgaard (University of Bergen, Norway) and Víctor Reglero (University of Valencia, Spain), who form the ASIM Facility Science Team.

ASIM’s objective is to monitor violent phenomena in the Earth’s atmosphere from Optical to Gamma Rays at 40 MeV, an activity that the telescope has been carrying out since June 2018, having already detected 1000 gamma-ray eruptions. “Given that these phenomena are unpredictable, ASIM decides completely autonomously when something has happened and sends the data to the different centres of the Science Data Centre in Copenhagen, Bergen and Valencia”, explains Víctor Reglero.

The detection of quasi-periodic oscillations in GRB2001415 has been quite a challenge from the point of view of signal analysis. “The difficulty lies in the brevity of the signal, whose amplitude rapidly decays and becomes embedded in background noise. And, as it is correlated noise, it is difficult to distinguish its signal”, details Reglero. The intelligence of the system that we have developed at the University of Valencia is what has allowed, together with sophisticated data analysis techniques, to detect this spectacular phenomenon.

Although these eruptions had already been detected in two of the thirty known magnetars in our galaxy and in some other nearby galaxies, GRB2001415 would be the most distant magnetar eruption captured to date, being in the Sculptor group of galaxies about thirteen million light years. “Seen in perspective, it has been as if the magnetar wanted to indicate its existence to us from its cosmic solitude, singing in the kHz with the force of a Pavarotti of a billion suns”, says Reglero.

According to the authors of the paper now published in Nature, this eruption has provided a crucial component in understanding how magnetic stresses are produced in and around a neutron star. Continuous monitoring of magnetars in nearby galaxies will help to understand this phenomenon, and will also pave the way to a better understanding of fast radio bursts, currently one of the most enigmatic phenomena in astronomy.